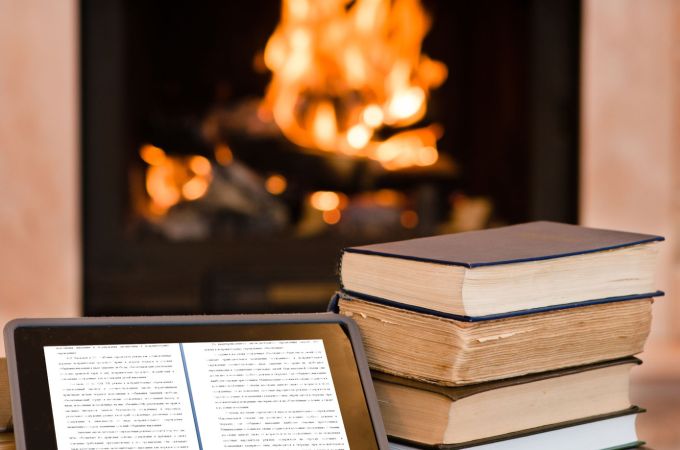 Fahrenheit 72 (ebooks, censorship and the end of knowledge) May 26, 2014Featured, Reflections0 Comments

Fahrenheit 72 is room temperature. The temperature at which ebooks get deleted.

The extreme centralization of knowledge we are experiencing, and the ease with which that knowledge can be damaged, corrupted, or just plain erased should be cause for concern to anyone who values books, who values the truth, who values their freedom to think and write and speak.

In the past — let’s take 1930s Germany under the Nazis for an example — a certain amount of mass hysteria, mass participation was required to burn books. Hitler actually had to convince a lot of people to start throwing books onto bonfires in the street.

But it’s not fair to single out the Nazis. The trope reappears again and again over the millenia. Perhaps a better cognate to our current state of affairs is the burning of the library of Alexandria. Before the invention of the printing press, books (well, scrolls) as a store of knowledge were inevitably of limited circulation. Knowledge became centralized, and therefore vulnerable to being wiped out.

Was the burning of the library of Alexandria an accident? A goat kicked over a lamp, perhaps? Was it arson? A disgruntled clerk who got stiffed on a copy job? Or was it, whatever the details, an expression of the ancient world’s desire for ignorance and an end to knowledge?

As human beings we spend our lives avoiding the obvious. Avoiding seeing the truth about ourselves everpresent in the mirror. As societies, as cultures, as empires, we likewise refuse to accept the unpleasant, unbearable truths about who and what we really are. Those who dare express those truths — Julian Assange comes to mind — will be hounded to the grave.

These days, like in the ancient world, it doesn’t take hundreds of thousands of angry Germans throwing their books onto the fire to avoid confronting the unpleasant truths of our nature.

All it takes is a small handful of men with the right tools, and human knowledge will vanish.

Before you accuse me of fear-mongering and exaggeration, let’s examine the tools that they have at their disposal, and then you tell me if you still think I’m exaggerating.

Ebooks are rapidly becoming the coin of the realm in book publishing. Aside from certain niche areas — illustrated children’s books and cookbooks, for example — the move to ebooks has happened rapidly, and in the near future print books will be specialty anachronisms, like audiophiles who insist on buying and listening to vinyl LPs.

Who controls these ebooks?

At the moment, Amazon. (This is not a blog post bashing Amazon. Keep reading.) Amazon designed the Kindle so that they can update, modify and delete content on your kindle device without your knowledge or consent. (This is not news. See here).

Now. Let’s give Amazon the benefit of the doubt here. Which I think they deserve. Amazon is in the business of selling books, not destroying them.

If Amazon has this power, any sufficiently powerful hacker has that same power.

Suppose. Suppose the NSA wants to censor an offending tome. It is safe to say the NSA owns Amazon’s servers. There are few IT departments anywhere capable of withstanding a determined assault by an national security state adversary. So the NSA cracks Amazon’s servers, mass deletes the offending tome — or better yet, simply mangles portions of the book, a plausibly deniable tactic that makes the author look foolish.

There’s no need to worry about First Amendment issues. It’s all plausibly deniable. A computer glitch, they’ll say. Some sort of weird bug. Who knew? No computer system is perfect. And, of course, a national security state adversary is more than capable of leaving no tracks for a forensics investigator to discover, assuming the “bug” story even raised an IT security person’s suspicions.

It will begin small, a damaged ebook here, a frustrated author there. What then? It’s too early for complete destruction of knowledge, too many paperback copies are still around, too many CDs and DVDs. But paperbacks are going fast, and as all knowledge moves into The Cloud, there will reach a point, a tipping point, when a single stroke of keys from a pudgy, self-righteous geek in the NSA’s headquarters is enough to erase any controversial book, set loose a virus that hunts down offending books, offending thoughts, and destroys them.

The Thought Police won’t knock on your door and drag you away. They’ll simply delete all your files.

Information, the destructive countervailing force, travels under the mantle of art, or its more humble simulacrum, entertainment, as rapine and pillage go by the name Lebensraum or Manifest Destiny or the Monroe Doctrine.

We are, in the grip of this phenomenon, entering a new dark age. The information age is centralizing knowledge, rendering it liable to despotic control. We can write letters and deliver them by hand. If, however, we communicate only over the phone lines, the flip of one centralized switch renders us isolated.

Similarly, if “information” is centralized in government-controlled “computer banks,” liable to power outage or electronic mishap, might one not intuit that, yet again, the culture is voting for/being impelled toward an eradication of knowledge?

Yet again, we are in the sweep of vast forces–forces so vast, their sweep so difficult to resist, that we must explain their power over us by fervently advocating them, by defining their unquestionable, irresistible power as financial cornucopia and, by extension, as good.

Typing out this last paragraph made me think of Joe Konrath and Barry Eisler. I respect both authors enormously, and their arguments for self-publishing are powerful and reasonable and undeniable. Even Mamet himself has jumped on the self-publishing bandwagon. Yet one has to wonder if they are not playing bit parts in a larger drama — or, rather, tragedy — that is currently playing itself out around us, and through us, and inside of us all. A tragedy that will leave our children and grandchildren empty-headed, thoughtless drones, in a new dark age as brutal as that which followed the collapse of Rome.

I only hope I’m wrong.