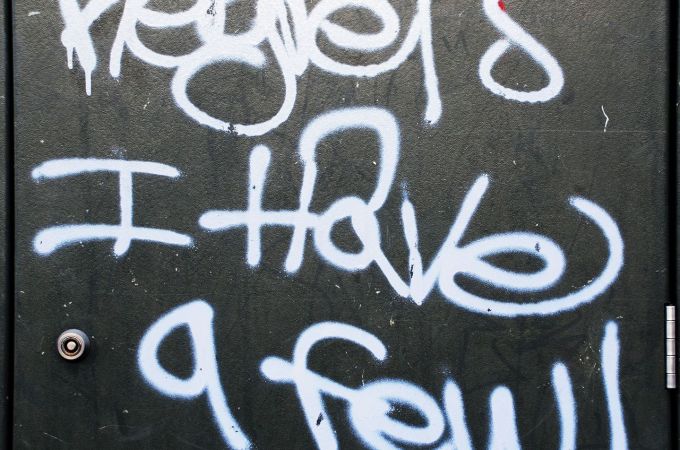 The song, “My Way,” popularized by Frank Sinatra in 1969, contains a line that has always irritated the heck out of me. It’s this one:

Regrets, I’ve had a few, but then again, too few to mention...

Really? Really? Who has ever had so few regrets they can’t even mention them? Not me. I could produce a regret list longer than Snoop Dogg’s rap sheet, and I’m not even famous or a criminal.

I seriously doubt Frank Sinatra didn’t have any regrets, anyway. We’re talking about a man who spent a good part of his life in Las Vegas, had ties to the mob and was married four times. I can’t believe he could sing that song with a straight face.

Of course, having only been to Las Vegas twice myself, my regrets are mostly of the garden variety. Ones like foregoing my regular hairstylist on a whim to get my hair cut in a mall walk-in shop. (Bad idea.) Or buying gallons of discounted interior paint without doing a test patch first. (Even worse idea.)

Yet, not one of my past regrets packs the punch of my most recent regrettable decision. That was the decision to sign a publishing contract with a small royalty publisher for my first novel.

As any first-time novelist knows, the excitement surrounding one’s first book is blinding. So much so that one tends to walk right over the top of important red flags. The first flag I ground into the mud with the sole of my fuzzy slipper was the one marked “You’re Signing Over ALL Your Rights, Idiot!” I ignored this one because, as a student of twentieth century old-school thought, I was prejudiced against self-publishing. I wrinkled my nose at self-published books, and so it was with a flourish of arrogant pride that I signed on the dotted line.

Sigh. You’d think as a Christian fiction writer I would have heeded the teachings I promoted in my own book. Especially that pesky little scripture that says, “Pride goes before destruction and a haughty spirit before a fall.” But no, not me. No sir. I threw caution to the winds and basked in the temporary glow of my awesome superiority over those lowly self-published authors. That glow lasted about as long as Frank Sinatra’s marriage to Mia Farrow.

Another red flag was the publisher’s offer of a deep discount on books that I could buy directly from them upon signing the contract. I was so seduced by the thought of eager readers lining up outside my home to buy armloads of my books, I agreed to purchase a shipping container of my precious novel before it was even printed.

Okay, okay, not a shipping container—I’m being dramatic—but a pallet packed with one thousand books might as well have arrived on a Wal Mart steamer from China for all the space that many boxes took up in our spare bedroom.

To this day I’m not really sure if I was subsidy published or not. I was so naïve, so ignorant and so impressed with myself I didn’t ask the one question that should never, ever be left unasked of a small press that offers no advance—“If I don’t purchase any of my books will you still publish it?”

By buying an obscene amount of my own books, I effectively placed myself in the Subsidy Published category, no matter how slick my cut-rate agent spun it. And, of course, it’s no secret that subsidy publishers are considered the illegitimate offspring of the industry. Sort of like that hit song Cher recorded eons ago. I can just picture her, onstage at Caesar’s Palace, decked out in her farcical chieftain headdress and floor-length loincloth singing it as I write this— Both sides were against me since the day I was born…

So here’s my regret in a nutshell: I paid big bucks to sign away all my rights to my own work.

What did I get for this? Zero marketing support, zero email support, zero answered phone calls. Zero answers, period. After the first year of limited contact, the publisher threw me back like I was a puny minnow and walked down the riverbank to fish for bigger suckers. I was abandoned, orphaned.

The up side to this, however, is that I learned real fast how to make a living on the streets.

I mean, if I ever wanted to house visitors in the guest room again, I was going to have to pound the pavement and sell those books myself. So I did. I loaded the boxes in my car and sweet-talked my books onto regional bookstore shelves. I did book signings, radio interviews, and spoke for free at local events. I nabbed some newspaper interviews and was featured on a couple of local online news sites.

At home, I simply obeyed Google and did everything its links told me to. I started a blog, created a website, made a Facebook author page, and opened a Twitter account. I did giveaways and begged for Amazon reviews.

I found my market niche and built up a reader base. Not huge, mind you, but pretty big for someone living in the woods of a rural area. The best part was realizing I didn’t need the credibility of a royalty publisher after all. My novel has been so well-received it stands on its own merit. People like it, so they buy it. I still haven’t emptied all the boxes yet, but I’ve whittled the pile down to less than half its original size.

Hence, my decision to self-publish the sequel was a no-brainer. I consulted Google on the art of indie publishing and realized right away that I should go the full DIY route. Bypassing the self-publishing companies in order to retain full control over design and formatting boiled my choices down to Ingram Spark and Createspace. I chose Createspace.

It’s been a great experience. The learning curve for interior formatting was steep and time-consuming, but I’m much happier with the way the sequel’s pages look than I am with the too-light print, cramped spacing, tiny margins and placement of page numbers on beginning chapter pages of the first book. I avoided all those errors myself and am really happy with the print version. And at the rate my readers have been snatching up their copies of Book Two, I’d say they like it as well.

My own cover design turned out pretty good too, although I’m thinking of utilizing CreativIndieCovers.com for some tweaking and font help. I’m more of a word artist than a graphic artist. But that doesn’t matter now because, as Masters of the Universe He-Man says, “I HAVE THE POWER!”

You know, if Frank Sinatra had been singing about the indie publishing world, I wouldn’t have suspected him of lying. In fact I could have sung along with him with a clear conscience because, when it comes to my self-publishing journey, I really have regrets too few to mention.

Maybe that’s because I did it My Way.

Is it time for you to finally do it your way, too?